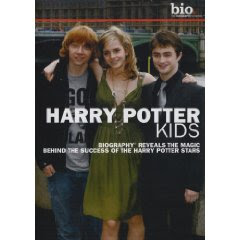 Personally, I enjoy The Biography Channel so I was very excited to have the opportunity to watch this DVD since I missed the original broadcast. And I was not disappointed. I just wished it could have been longer than 50 minutes.

The program begins with the background story of the Harry Potter books and the author J.K. Rowling. Warner Bros. bought the rights six months after Scholastic Books published Harry Potter and the Sorcerer’s Stone. The search for the child actors to play Harry Potter, Ron Weasley, and Hermione Granger happened in 2000. 40,000 children were considered. In this program, J.K. Rowling compared the search to the one for an actress to portray Scarlett O’Hara in Gone With The Wind in 1939.

The program continues with a brief account of Daniel Radcliffe who was officially announced to be the one to play “Harry Potter” on August 21, 2000. There are a few interview clips of him through the years. His other acting projects like December Boys and Equus are also mentioned. I enjoyed a clip of a scene he did with Dame Maggie Smith (Professor McGonagall) in his first film, BBC’s David Copperfield.

Emma Watson was the next “Harry Potter” kid to be mentioned. After a short review of her background, there were a few comments from media sources on how she evolved into a young woman through her years of acting the part of “Hermione Granger” in the past five Harry Potter films. Her college plans were mentioned. At the time this program was filmed, the Deathly Hallows kiss was more of a future consideration than it is now.

Then, Rupert Grint and his background were discussed. Positive comments were made about his acting as “Ron Weasley”. His movies Thunderpants and Driving Lessons were mentioned.

Although a lot of the information is already well-known to Harry Potter fans, there were a few details I enjoyed discovering. For example, I didn’t know the Bloomsbury Publishing office was above a Chinese restaurant. From photos of his parents that were shown in the program, I can see Daniel Radcliffe’s resemblance to his mother. And poor Emma Watson had to wear dentures in the first two films because she lost some of her baby teeth during shooting. There are a few more details, but I think a fan of the “Harry Potter Kids” should get the DVD to find out what they are.