Battlestar Galactica: Your Next Boxed Set! 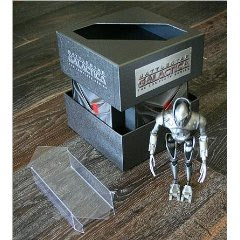 Battlestar Galactica has it all: depth, darkness, beauty, brains, nuance, romance, planet-sized plot twists – and robots who look exactly like underwear models. If you think you hate sci-fi, now is the time to get over it. Suck up the spaceships; they are integral to the plot. Just give it four or five episodes, same rule as for any other box set.

The place to start is the 2003 TV miniseries. If you skip that, or indeed if you skip about at all over the course of the five series that follow, then (as the great Charlie Brooker once put it) BSG will make as much sense as a wool piano. Early on there are a few duff, missable episodes, but mostly you need to pay close attention. The plot is devilishly complex. At times it flirts with incomprehensibility. But in a good way.

The basic premise is that robots called Cylons – originally created by humans, now very much their own people – turn up after 40 years in the wilderness to nuke humanity. Only a few humans are left to flee, aboard the good ship Battlestar Galactica. Then they realise that Cylons have evolved from the shiny metal things they once were: they look human now. And some of these Cylons are living, unidentified, among them. After that, trying to guess which of our flawed heroes is a Cylon becomes a big part of the fun.

On top of that, there's a whole myth-arc about destiny and history; there are some very big space battles; and the humans have to piece together a political system that makes sense when you're on the brink of extinction. In fact, BSG is pointedly political throughout. The fighter-pilot lead character Starbuck (who was a man in the original 1970s series that started it all ) is a woman, and the whole show is stacked with powerful female characters. Series three is one big metaphor for the war in Iraq.

Oh, just buy the lot and watch them. These people deserve your money