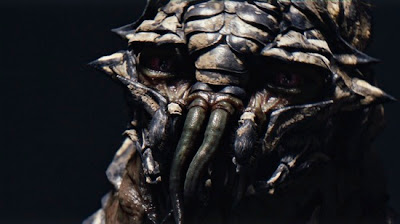 Neill Blomkamp, the South African writer-director of the upcoming sci-fi drama District 9, has yet to find out whether his movie will catch on with wider audiences the same way it did with folks who saw footage from it at last week's San Diego Comic-Con.

But the filmmaker said that he would be happy to return to the film's universe if it became a box-office smash. "If this film is successful, if audiences want another, whatever, District 10, I would love to do it," Blomkamp said in an exclusive interview this week in Los Angeles. "It's a very personal film, and it's a universe and a place that I find incredibly creative. I'd love to go back to that universe."

The movie deals with the arrival of a million insectoid aliens, derisively called "Prawns," in a massive ship over Johannesburg, South Africa, and the uneasy coexistence between humans and aliens 28 years later who live in the grinding poverty and violence of a township-like camp. The action is set in motion by a low-level bureaucrat, played by newcomer Sharlto Copley, who heads an armed force that enters the slum, District 9, to make way for a forced relocation of the aliens. When things take an unexpected turn, Copley's Wikus van der Merwe finds his life turned upside down, and he is forced to question his assumptions and forge an uneasy alliance with an alien and his young son.

Blomkamp said that if audiences wanted something different from him, he was working on something else that would no doubt appeal to the same audience, even if the project went in a slightly different direction.

"I have another science fiction film now that I want to write for the rest of the year," Blomkamp said. "That I think may be the next one, and I'm incredibly into [it]. It's quite different, and it's a unique idea, but I'm very into it."

Describing the tone, he said it would feature a similar combination of grand ideas and great action set pieces: "It's similar," he said coyly. "I mean, it's a very different film, but it's a very similar genre, I suppose."